Enjoy our Happy Friends Week until October 14th: buy 1 ticket, get your 2nd ticket for free!

On this occasion, JazzLab is not presenting a band but a label. Aspen Editions is a small, independent record company, founded by musicians Ruben Machtelinckx and Niels Van Heertum and writer Sanne Huysmans, which has made a name for itself with wonderfully designed releases. The music on this label moves between jazz and improvisation, contemporary classical, pop and folk influences and electronic music.

The artists describe their work as ‘integral music’, music that escapes traditional genres, made by musicians that stubbornly go their own way. This ambition has paid off: the releases have always been enthusiastically received in Belgium and abroad. The debut album of the Porous Structures quartet has recently been granted the Klara award for the best Belgian jazz album 2019.

This label night combines classics with musicians from the wide entourage of Aspen Editions.

If you attend the concert, you get a chance to win one of the beautiful Aspen albums: one by Veder and one by Porous Structures (Machtelinckx / Cools / Badenhorst / Gouband)!

For several years, guitarist Ruben Machtelinckx and reed player Thomas Jillings have been collaborating as composers and instrumentalists under the flag of Linus. In 2014, the duo made its debut and the characteristical simplicity and sedate intensity of their music were striking. Over the following years, their sound also developed in other directions and with the contribution of fellow musicians their interplay sometimes became more experimental and edgy.

With the kindred spirits of Niels Van Heertum, Nils Økland and Ingar Zach, they've reached their present culmination point on their musical journey. Compositions and improvisations are resourcefully and naturally alternated, creating a trance effect. At one point, the interaction is dreamy and soft; the following moment it becomes edgy and rough. Their music is free but coherent, balances simplicity and depth, and is always full of surprises.

Three top-notch musicians combined, gentle but fearless! Frederik Leroux and Kris Vanderstraeten have joined forces on several remarkable projects. Their album zonder webben (Aspen 004), for example, was an abstract as well as organic plunge into the world of pure sounds. With the help of reed player Frans Van Isacker, they widen the dialogue and expand their range in sounds, temperaments and ambiences. The trio will release a new album on Aspen Editions this fall. 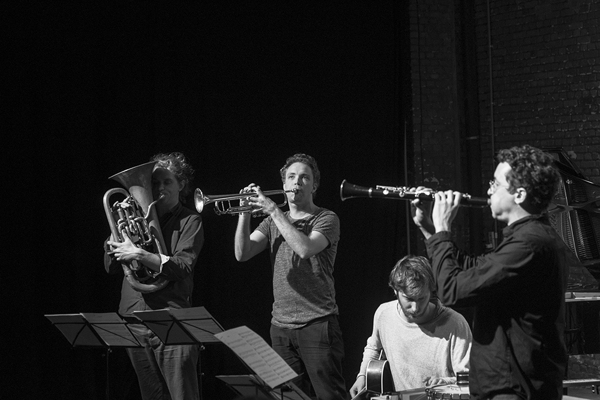