Enjoy our Happy Friends Week until October 14th: buy 1 ticket, get your 2nd ticket for free!

Circus artists portray other circus artists. They don’t paint a true picture, but rather a surprising portrait of the situation.

In Portraits, Aline Breucker and Quintijn Ketels portray two circus artists: Camille Paycha and Sander De Cuyper. The idea behind this is pretty simple. The audience enter a workshop where people are wrapped up in their job and in philosophising. At the same time, the performers try to give structure to their ideas and put things into place. Existential questions come up, such as “Is it a portrait of a person, a practice or a relationship between two people?” and "If you look at me, who am I looking at?”. A surprising picture of the situation is painted in circus techniques, drawings and monotypes.

Like a distorting mirror
Portraits is not aimed at creating a true-to-life portrait. A portrait does more than just record reality, it always distorts reality as well. It looks at a person in a specific situation and through a specific medium. There is room for contradicting layers, for glitches. The movements on stage enter into a dialogue with a soundtrack in which personal anecdotes by Aline, Camille and Sander alternate with observations about their work.

Since 2021, the new circus workshop CIRKLABO has supported circus artists in their artistic development.
After nearly a year, over 20 circus troupes have made use of the site. During Winter Circus 2021, we therefore present an extra dose of circus from our own circus workshop. The various circus troupes are all connected to Leuven one way or another, their creations have been partly created in Leuven and are supported or coproduced by CIRKLABO. 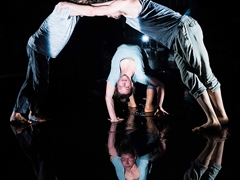 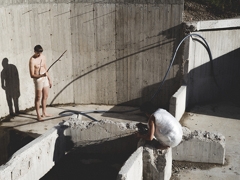 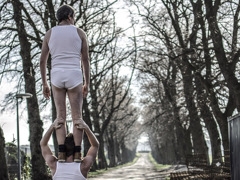